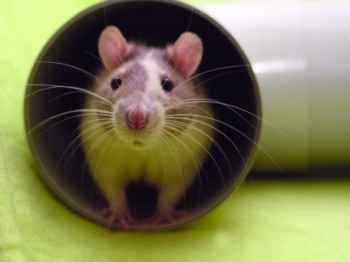 An experiment co-funded by the British Heart Foundation (BHF)[1] and conducted at Cambridge University involved rats being confined in ‘hypoxia chambers’ for two weeks, where they were forced to breathe air that had a low concentration of oxygen.[2]

The research was investigating whether eating vegetables rich in nitrates, (such as kale and spinach) could prevent some heart patients from developing a condition in which their organs do not receive enough oxygen. Eating green vegetables is already recommended as part of a healthy diet, but there is no reason why the researchers’ theory could not have been studied on volunteer patients. As well as sparing dozens of animals the misery of invasive experiments, a study on humans would have produced results that are relevant to our own species.

[1] The BHF declares that it helped fund the study at: https://www.bhf.org.uk/news-from-the-bhf/news-archive/2014/december/dietary-nitrates

[3] Reports of the scientific committee for food: Nitrates http://ec.europa.eu/food/fs/sc/scf/reports/scf_reports_38.pdf